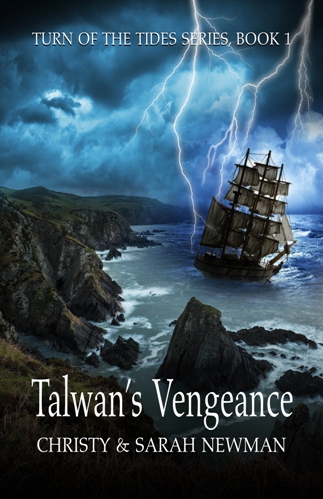 Turn of the Tides Series Book One

18-year-old Loslin Kelser has had to grow up fast and has gone from being a slave to a feared master pirate. His ship, the Talwan, takes him on many adventures on the planet Atho. With his brother West (who now stutters from all the abuse he has endured as a slave), sidekick Tarana, and a ship full of ex-slave children, he embarks on the adventure of their lives. In their quest to uncover the truth about a mysterious scroll linked to the Kelser family, the crew of the Talwan encounters perils and discovers secrets hidden for years.

Turn of the Tides Reviews

“Great beginning to a promising series. The adventure of two pirate brothers, former slaves, seeking vengeance on those who have wronged them. Until they learn of a greater mystery through a magical map, and their voyage of simple revenge becomes a journey of much greater importance.” – Steven

“In their quest to uncover the truth about a scroll linked to the boy’s family, the crew of the Talwan encounter secrets they never knew existed. This novel is a promising start to an interesting series for young adults; but grown-ups will like it too, as it holds its own in the sci fi/epic fantasy genre. If fantasy is your passion, go no further. Recommended.” – Oregongirl

“This book is a great read and a wonderful escape from today’s troubled world! I enjoyed the surrealistic pirate plot, intrigue, character development, and the way it was written with “memory” flashbacks. The brothers Loslin and West’s adventures on sea and on land with all kinds of nefarious characters really added a page turning element to this book.” – Marian