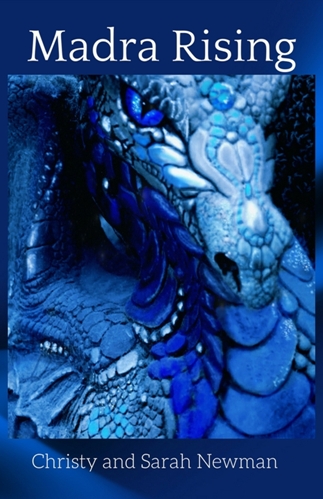 For five years, the Kingdom of Madra has been at war.  In a last effort to save his people, the Prince travels toward Eldale, a city of dragon tamers.  Unaware of this, Eldale has sent its most valued dragon tamer to the dying city with the one thing that can save them.  in this tale of harrowing danger and destiny where the two must keep their missions secret, they cross paths and join forces to recover the stolen treasure.

“A character-driven fantasy packed full of surprising twists and turns. A Red Ribbon Winner and highly recommended to 12 and over.'” The Wishing Shelf Book Awards

“This novel really brought me back to my younger days of Lloyd Alexander’s novels – ‘The Black Cauldron,’ ‘The Horned King,’ etc. It was really well written for two girls becoming writers. I must say as a fellow student of Creative Writing – never stop!” – Chantal

“From the first sentence I enjoyed Madra Rising, the story was well done and the wording helped you visualize what was being said, I really liked the fact that the story moved at a good pace, in so many books there are parts that drag, luckily for me this wasn’t one of them.” – Gordon

“Here is a charming tale of Arya and Finley, a princess and prince from distant kingdoms who meet over the crisis of a stolen dragon egg. Both of these characters command reader sympathy. Their romance develops gently while war against a ‘bad king’ wages.” – Freddie